Did you know that the Benjamin S. Rosenthal Library is home to a collection of over 2000 rare books and manuscripts, the scope of which reflects the history of print culture over the past 600 years? Due to an unfortunate flood in the storage room where this collection was held, the materials became hazardous and were inaccessible for over a decade. Now, due to the generosity of Shirley Klein, a life-long bibliophile and loyal friend of Queens College, the entire collection has been remediated and will once again become an asset for the campus community.

Highlights of the collection include a 13th century manuscript copy of the medieval Persian poet Sa’di’s The Gulistan, 11 editions of Cervantes’ Don Quixote de la Mancha including the first edition printed in English in 1620, and three part-publications of Dickens novels including Dombey and Son (1848). There are over 600 titles of juvenile fiction from the late 19th to the first half of the 20th century, and many books autographed by the author, including some major ones, such as Graham Greene, Aldous Huxley, Virginia Woolf, Jack Kerouac, and José María Arguedas.

In December the books were taken offsite, where trained technicians used advanced HEPA vacuums, chemical treatments, and other specialized cleaning techniques to remove mold from each of the 2,500 books, rendering them safe for access. The collection was originally slated for return in April, but the library was closed due to the COVID-19 pandemic. Finally, on September 18th, the rare books made their triumphant return to Rosenthal, delivered to our brand-new, climate controlled storage space on nine pallets.

Much work remains to be done to ensure that the collection is properly housed, shelved, and cataloged. For now, we celebrate the books’ return and express our gratitude to Shirley Klein for providing the library with resources needed to save the collection. Those who want a sneak peak can peruse digitized selections of more recent donations (unaffected by water damage) at https://www.jstor.org/site/queenscollegearchives/rarebooks/.

The Queens College Library would like to share some tips for remote access to many of our resources and services. The full guide to our services and other tools for supporting remote research is available here: https://qc-cuny.libguides.com/coronavirus. It also contains links to the latest scholarship and QC information on COVID-19.

The Color of Success tells of the astonishing transformation of Asians in the United States from the “yellow peril” to “model minorities”–peoples distinct from the white majority but lauded as well-assimilated, upwardly mobile, and exemplars of traditional family values–in the middle decades of the twentieth century 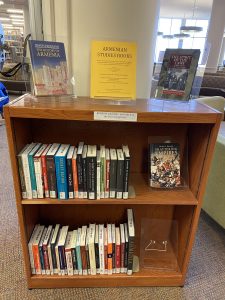 Visitors to Rosenthal Library’s Level 3 will notice a new display of books on Armenian Studies. These books were purchased through the generous donation of Hratch Zadoian, professor of political science and retired administrator at Queens College.