If you’re afraid of insects and specifically the creepy crawly way with which they move then proceed with caution…even though what follows is not technically an insect but an insect-inspired hexapod robot – but don’t say we didn’t warn you! 🪰🪲🪳🐞 🤖  😱

We caught up with Nachum T. (Mathematics, ’22), who in a time before COVID was frequently spotted in the QC Makerspace, whether engaging the Knights Robotics team members or working on independent projects and initiatives. His makerspace activities have evolved on their own during COVID, with Nachum acquiring a 3D-printer all his own while continuing to explore robotics – and that’s where the insect reference crawls into focus.

While it doesn’t yet have a name, Nachum has been building & tinkering with a robot of hexapod design — that is it has six legs like its insect counterpart: 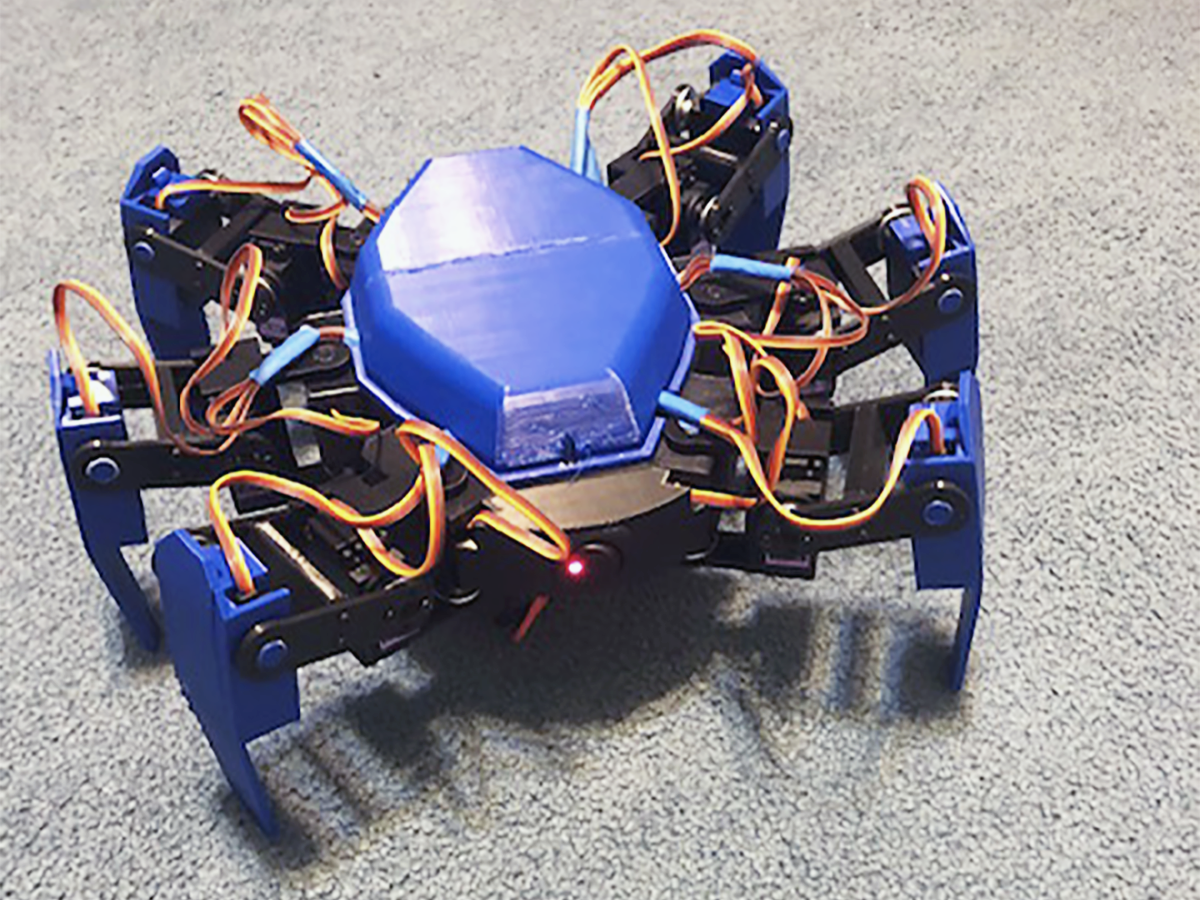 When we heard what Nachum was up to we were extremely curious and had several questions, which lead to several more questions. What follows is a distillation of our email exchanges re-presented as a type of Q&A or interview with Nachum.

QC Makerspace: Did you 3D-print the chassis?

Nachum T: I 3D-printed everything of the robot. I used brass threaded inserts and used a soldering iron to push them into place to hold the servos.

QCM: What 3D-printer did you eventually choose? And what material are you using for this ‘bot? (Also: Kudos on the brass threaded inserts – that’s a wicked trick of the trade and watching them insert via soldering iron is so satisfying!)

NT: I spoke with Bahti [from Knights Robotics] and eventually went with the MonoPrice Voxel (or Flashforge Adventurer 3). This printer is in my room so I need a relatively quiet and compact one (so no Ender 3). The bed size was a small issue but I manage with making prints larger than the bed (wait till you see what robot I’m building next 🙂 ). I used microcenter Inland PLA+ for the build. I haven’t had any issues with it and its what I’ve been using on it for the past couple of months running the printer no stop. And it’s 18$ a roll! So I couldn’t get a better deal than that.

QCM: What microcontroller are you using? What code are you running?

NT: The entire thing is powered by an Arduino Nano, using Arduino code with an imported PS2 controller library from Github. 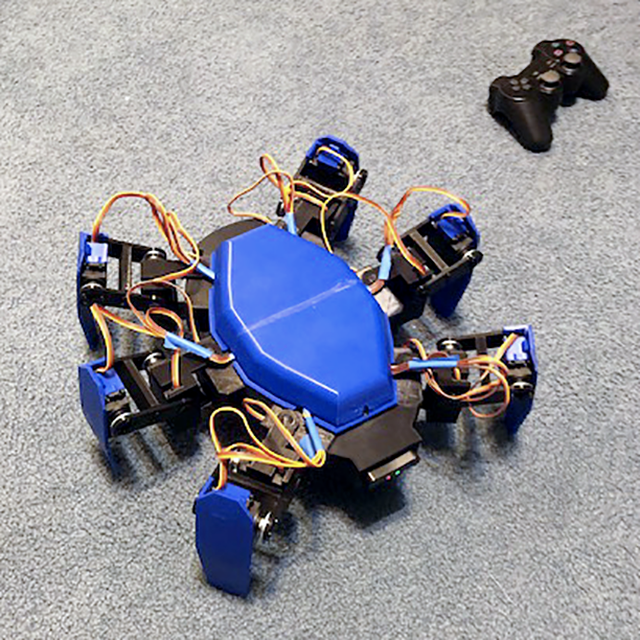 QCM: And what type of servos are you using?

NT: These are MG996R servos which I ordered from AliExpress. They have a rated torque of 13Kg/cm at 6 volts. And after doing some quick free body diagrams+ physics equations I was able to determine that this would be enough. (because the robot has to be able to hold itself up on 3 legs at all times for the “tri-pod” gait you can see in video) the code is widely used for any hexapod and does all the inverse kinematics for you. You just have to make sure the code is adjusted for your hexapod. i.e. the length of each joint, the size of the body, and the direction of the servos.  I had one small problem with the code moving my robot backwards when I wanted it to go forward. So I reached out to Bahti who helped me out and told which SINGLE value to put “-“ before it.

Here’s a quick video of the hexapod in action:

QCM: Okay you mention 6 volts. Tell us more about the power source 🙂

NT: I was too scared to use LiPo batteries ( you know because of the having a mini atomic reactor in my room didn’t make me feel so comfortable)  so I had to end up using NiMh which don’t have the same type of power output. In the end I finally found one which got close, but it was much heavier. This also caused some issues because I was planning on using Lipo based voltage regulators which come with almost all of the connections I needed to begin with and could handle the 10-15A output required to power all these servos at once (technically the max I would need is 18A.) in the end I found a massive voltage regulator rated for 50A it just had such a large heatsink that I had to redesign the body completely.

The battery [is] attached to the underside of the belly with Velcro. In my head I felt that this would help lower the center of gravity and help the robot stay balanced (although I have no idea if this is true). There is a hole in the bottom for the Tamiya connector to pass through. The resolve to the heatsink issue was….. just make the robot higher! Seriously! In the end the robot “hood” ( the blue cap) was just made 8 mm taller to accommodate the coil on the buck converter.

Here’s an image of the underside of the bot with the battery attached: 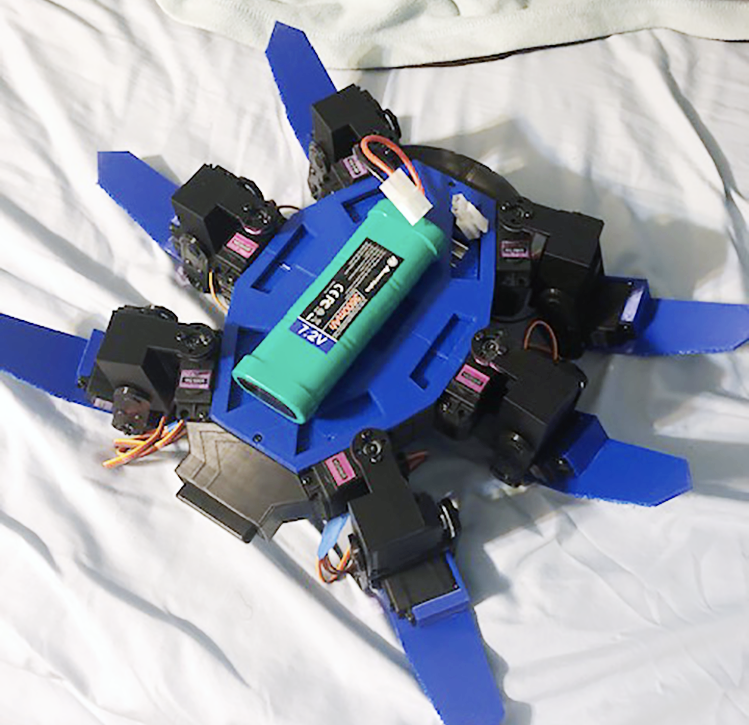 [ You can see the battery is rated for 7.2V, but Nachum mentioned 6V servos. That’s where the buck converter comes in handy. ]

QCM: And what have you named this crawlbot?

NT: The most important question of all. Does it have a name. No. In all the excitement of having a working robot I completely neglected that part. I’ll get back to you shortly 🙂

Well, Nachum, whatever you end up naming it you did a great job from start to finish – from having to redesign things to the electronics and coding. We’re just glad most earth-based hexapods aren’t larger than insects…most!