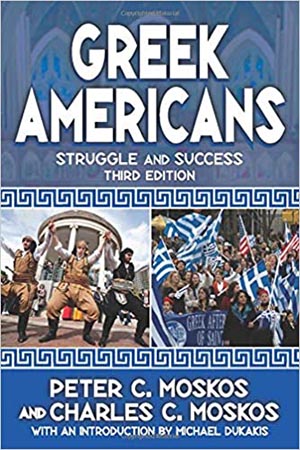 March is Greek American Heritage Month!  To support the celebration, we are featuring several exemplary ebooks and streaming videos available via the Benjamin S. Rosenthal online library.  Greek American scholars and students study the complexities of Greek immigrant assimilation within American ethnic identity.   Currently, over 2.5 million Americans are of Greek descent. New York has the highest concentration of Greek Americans and Queens College the most of any college at 1500!

Queens College offers courses that touch on Greek American Studies, either through the Center for Byzantine & Modern Greek Studies or in the Modern Greek language and literature program of the European Languages and Literatures department.

We are proud of our growing collection of books, films, and more in Greek American studies!  Below are some highlights from our collection.  To learn more, please see our Greek American Studies libguide.

“Yiorgo Anagnostou explores the construction of ethnic history and reveals how and why white ethnics selectively retain, rework, or reject their pasts. Challenging the tendency to portray Americans of European background as a uniform cultural category, the author demonstrates how a generalized view of American white ethnics misses the specific identity issues of particular groups as well as their internal differences.”

The religion of ethnicity : belief and belonging in a Greek-American community by Gary A. Kunkelman

“The integrative role of religion has been a recurrent theme of sociological and anthropological theory. This role is apparent in the Greek-American community; religion functions as a cement of the social fabric. Indeed, it would be hard to overestimate the role of Greek Orthodoxy in joining people of Greek ancestry into a community and reinforcing their sense of ethnic identity. The nature of ethnic identity and the church’s role in fostering and sustaining it are subjects of this study, first published in 1990.”

“This is an engrossing account of Greek Americans–their history, strengths, conflicts, aspirations, and contributions. This is the story of immigrants, their children and grandchildren, most of whom maintain an attachment to Greek ethnic identity even as they have become one of this country’s most successful ethnic groups.”

“Tom Volf’s MARIA BY CALLAS is the first film to tell the life story of the legendary Greek/American opera singer completely in her own words. Told through performances, TV interviews, home movies, family photographs, private letters and unpublished memoirs—nearly all of which have never been shown to the public—the film reveals the essence of an extraordinary woman who rose from humble beginnings in New York City to become a glamorous international superstar and one of the greatest artists of all time.”